WideEyedSpouse says, “We are not having a worm bin in the kitchen.”

The Worm Bin. In the Kitchen.

I bought Worms Eat My Garbage in June of 2009 and I don’t know why. The Spouse saw it sitting on the sofa and instantly, no pause for contemplation said: “We are not having a worm bin in the house.” I simply did not acknowledge that he spoke. 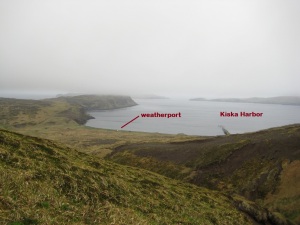 Several weeks later two colleagues and I were lounging around on Action Packers in our tiny weatherport on the shore of Kiska Harbor. Outside of the weatherport Kiska volcano loomed over us to the north (albeit invisibly because of the low clouds), the waters of the harbor ruffled in a stiff, rainy wind, and the Kiska Island Valor in the Pacific National Monument layered over the hills around us as far as the eye could see. My colleagues were on Kiska Island to map WWII features. I – along with Brian H. who wasn’t present for the worm talk – was there looking for much older Aleut occupations. Anyway, three of us were in the weatherport waiting for potatoes to boil and for the simple pleasure of being inside, sheltered from the vastiness of the western Aleutian Islands.

The topic of worm bins came up. I can’t remember who brought it up. But it is exactly the sort of topic that might arise in one of our field camps. Debbie C. was deeply intrigued. Of course she had heard of them. I mentioned the book. Janis K. actually had a worm bin, had had it for years. Debbie and I leaned forward on our Action Packers as Janis described the formation and care of her worm bin. I think I took notes. I looked at Debbie and she looked at me – oh yeah, we were getting worm bins.

I came out of the fieldwork that summer intent on having a worm bin. But as it turned out, the WideEyedHousehold was going to move 1,500 miles in a few short months. The Spouse said, “I am not moving a worm bin to New York.” I sort of heard him on that one. Besides, I figured they had worms back east.

Time passed. The worm bin lingered in the back of my mind. We bought a house and I built a compost area but it didn’t satisfy. I needed a worm bin. And then the miracle happened. My neighbors across the street mentioned that they have a worm bin. In the kitchen. Have been running it for years – no trouble, no smells, just great. My heart pounded. I hardly dared to ask…my neighbor offered me some scoops of her worms. Oh yeah.

Inside the bin. The wellspring of nightmare horrors.

Three days later I dumped a bunch of junk out of a bin in the basment, drilled some holes in its lid and handles, and headed across the street for my worm scoops. Ever since, two months and counting, there’s been a worm bin in my kitchen. So far, the Spouse has only had one nightmare about it. Apparently in his dream he was reaching in to feed the worms and one leaped out of the nesting material and burrowed under his finger nail. I guess in the dream he managed to tourniquet his finger and the worm wiggled out, but his success in solving that small dream problem hasn’t made him like the worm bin any better.

We’ll see how it goes. For now, there are several dozen? hundred? WideEyedWorms munching away on tender veg scraps in my kitchen. And one WideEyedSpouse who prefers not to think about it.