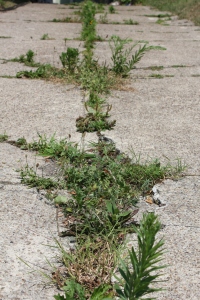 The weeds in the driveway now hit the undercarriage of the WideEyedRides. I can hear them smacking the bumper and the bigger sticky-er ones make tiny scraping noises as I putt-putt up the drive. Brush fires are a concern when I park the hot engines over the verdant crack weeds. I can’t turn my face away any longer. It is time to weed the driveway.

Years ago the Spouse and I developed a system for undertaking this wretched chore – which, you may note comes about ONLY during the smoking hottest sizzling portion of the summer.

Our system does not include herbicide. Have a look at that image over there on the right. If I blasted those tall, healthy, nearly blooming weeds with herbicide what would I get? Tall, dead, yellow weeds, even more likely to catch on fire, that’s what. And I don’t want to hear anything about maybe taking care of this before it becomes a problem, prophylactic herbicide application, whatever. This happens every year and has in every house we’ve ever owned. The situation exists. And the solution includes gin. Lots of gin.

First wait until the worst of the blasting heat fades. Tonight that’ll be about 7:45. Then assemble the ice, gin, tonic, and cucumber/limes, and mix up a couple of weed pulling cocktails –leaving the ingredients easy to hand. The Spouse and I find it useful to gather the weeding paraphernalia at this point. Now take a few moments to assess the situation, look over the weeds, measure the length of the drive, wave to passing neighbors – and end the assessment phase when the ice cubes no longer float, but rattle emptily.

Ok, so it’ll be about 8pm by this point. Maybe a little later. About an hour of usable daylight left. Now you need to step into the kitchen to mix up another couple of weed pulling gin and tonics. Get your music – Elvis or Delta Blues are best here – and start with the weeding. You should be feeling pretty cheery as you move into your second weed puller cocktail. But here’s the key to this step: start at the end of the drive most visible to the general public and be thorough while you still have the will and ability to be so.

When the ice is alone in the glass again, return to the kitchen and mix new weed pullers with your muddy, weed stained hands. It’ll be moving on to 8:20, 8:30 by this point. Dusk really. This is when the really noticeable work happens. Crouching carefully, so as not to spill, yank out the really tall driveway weeds. They’re the ones causing the problem anyway.

By 9pm it’ll be over and all will be tidy in the driveway – or let’s be honest here – it will be dark enough or your vision bleary enough to make it look tidy. Doesn’t matter. Effect is the same. Chore is done. Just FYI, it is tempting to mix another weed puller to sip on while appreciating the less weedy driveway for a little while but trust me, this is a Bad Idea. We’ll just leave it at that.

Remember, don’t ever drink and drive. But by all means, drink and weed if necessary.