Cruising on the Kulana Huli.

Are you heading to the basement? The Spouse asked me. I glared at him, turned a page in the LL Bean winter coats catalog. I didn’t want to head to the basement. The basement is where the fitness gear is kept. The stationary bike. The weights. The Bowflex that came with the house. The basement is a place of boredom and discomfort. I dislike it. On the other hand, I do like reasonable blood pressure and the ability to be agile as my person betrays me with age. So, as a household the Spouse , the dogs, and I frequent the basement. The people use the wretched gear. The dogs sniff the cat box and chew things.

Joe’s Deli has new specials up today, the Spouse continued on in an apparent non sequitur. It was a sneaky tactic. In the secret language of our long association he was suggesting two things: 1) Get take-out – and house rules state that if you SAY take-out, we GET take-out. Period. He didn’t quite say it though. 2) Avoid the basement – take-out and basement rarely occur on the same day.

I flipped more pages in the catalog.  It was a crummy choice. The basement and good health but no delicious take-out OR take-out and an escalation of the impending waistband emergency.

What if – and here I looked up to make direct eye contact with the Spouse – what if we rode our bikes over to the deli to get the take out?

The bright light of my genius flared the room and the Spouse stood straight and tall. He looked at me with love and awe. And so it was.

And it was great. I saw wondrous things on the ride to the take-out. A small red rubber ball, the kind that come from gum machines and dentist office chests, sadly lost and alone on the street. A jogger, a thousand joggers in the park, sweating and puffing. I smiled at them from my dignified, scarfed position aboard the mighty Kulana Huli. I bet they weren’t getting take-out.

I stopped at the zoo to look at the bison munching  their hay. We saw a butt made of pumpkins – with a stuffed straw person built around it to look like someone’s pants were drooping as they bent over. An angry or mean young person was flinging cds into traffic from atop an apartment building. A dog ran into the street and was saved. A cop car went by in massive fury, sailing over bumps at high speed. I smiled at a guy mowing his lawn and he smiled back. 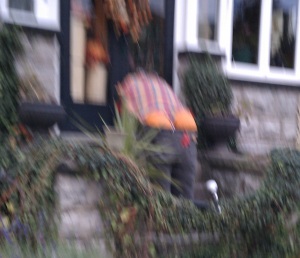 Blurry Pumpkin Butt. Me and the Kulana Huli cruised by too fast for a clear shot.

Within 30 minutes of the decision, the Spouse and I sat the stools at the kitchen table with a cheesesteak for me and a turkey reuben for him. His beer bottle fitzed when he opened it, and my wine gurgled into a glass. We smiled pretty smugly at each other and I think at the same time sneaked soggy take-out chips to dogs.