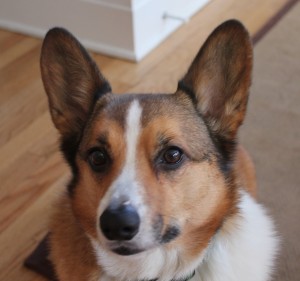 Hamish is forming an opinion.

Hamish just told me he thinks it’s more than time for morning walkies. It was simply his opinion. I didn’t care. Then he expressed his opinion to Miss Tibbit and she got all excited about it. It is now her opinion, also. Evidently, we will be having walkies soon if I am to have any peace in my day of Big Thinking.

Hamish has an opinion a little too often in the course of a day.

He believes that Wiggins The Cat should not be wandering around the house at 5:30am. He tells the cat so. We all must listen as a captive, bed-ridden audience.

He strongly believes that nasty looking, ancient, fuzzy dog should not walk on our sidewalk or wee on our flower beds three times a day, every day. He cries his thoughts on the matter in full voice, telling the block, telling the scrappy dog. As far as I can tell, only Miss Tibbit cares. 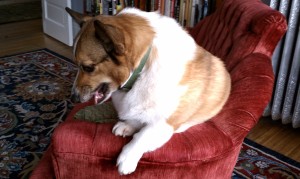 Hamish is entrenched in the notion that toys are his, and he graciously allows Miss Tibbit time with them. He observes her using toys from his Chair, and when her play is too rough, too fun, too engaged, he sits up sharply and tells her so. She never, ever listens. He speaks louder. She selectively hears harder. His opinion on this matter is of no consequence to Miss Tibbit.

When distributing his opinions, Hamish adopts a particularly annoying body posture. His ears are pricked. His head is high. His back is long and stiff. His stubby tail stands out. His tiny T-rex front legs are planted firmly. His lip curls after he declaims as he prepares to press his position. It should be cute.

I am unutterably tired of Hamish’s opinions.  But I still listen.

He is expressing one now, as Miss Tibbit approaches the top of the stairs without sanction. In Hamish’s opinion, it is not yet time to go downstairs. Now we all know.

I listen because I, like everyone else in the vicinity, have ears. I listen because Hamish is my companion, my dog-protector, and there may be a time when his opinion has value. Like, say, when the bear was coming to camp last summer. He didn’t care for that. Or when a skunk wandered toward Miss Tibbit in the backyard. He doesn’t like skunk stink. Even though his opinions are mostly the windy exhortations of a dog with too much to say, I listen. And if I am honest, he listens to all of mine.