“No more estate sales,” the WideEyedSpouse decreed on the way home from the upholsterer. We had just paid the deposit for redoing an antique sofa we scored for 20 dollars. It wasn’t going to cost 20 dollars to make it usably un-stinky and gross.

“No more upholstered furniture at estate sales,” I negotiated. He nodded. “For a while,” I amended, ignoring the sharp look he sent across the center console.

That was seven months ago. I broke only once late last spring and came home with an iron koi, an iron dragon, and antique porcelain vase with a little bird on it. Indisputably all cool things – none needing upholstering. “Ok,” the Spouse said, patting the dragon on the head and smiling at it, “no more estate sales until the house is painted.”

Last night we stashed the scaffolding in the basement. The fall rains started and the temperature dropped. We’ll finish next summer. This morning I saw the Spouse flipping through pictures on his computer tablet. “What’s that?” I asked. “Oh, just that estate sale down the street…we don’t need to buy anything but we could go to see the house.” 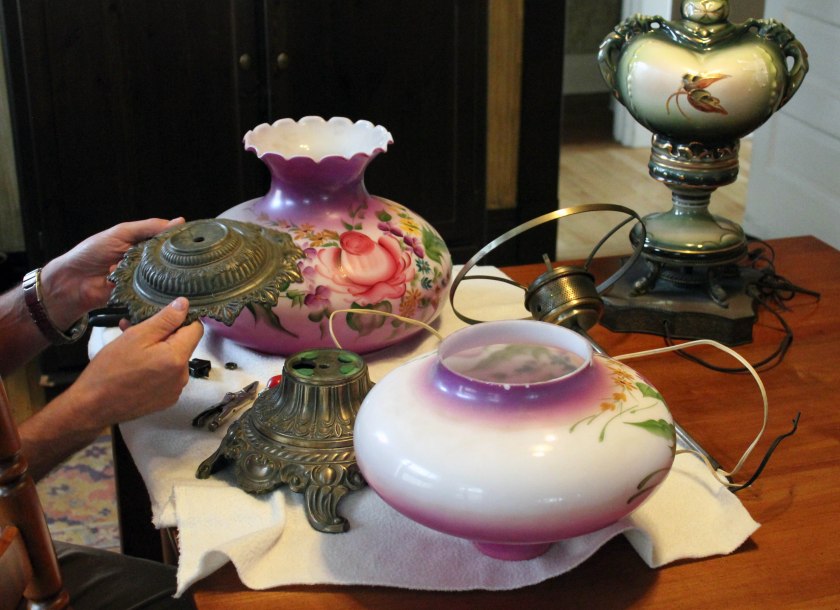 My new lamp has wee tiny koi fish as feet and the paint work is chipping a little bit. It might be a 1960s tv guide, limited edition kind of a lamp. It is sort of grotesque. The Spouse’s new lamp is a monstrous purple thing with hand painted flowers. It seems to be a Frankenstein, actually DESIGNED as a mash – maybe as some kind of post-war quickie production. Repurposed oil lamp parts, similarly designed cast metal pieces, sketchy wiring, giant glass globes, and decades of filth battle it out for most repugnant aspect. The red Christmas bulb in the base portion gave the thing a repulsive faux-Victorian, bordello glow. “Oh man, that’s something,” I said when the Spouse flicked it on – bravely flicked it on because the wiring was exposed through ancient electrical tape.

But here’s the thing. My new lamp goes, perfectly, with the imitation William Morris rug in the living room. The Spouse’s looks like it was made to complement the unspeakably ugly antique cotton Craftsman-era rug in the dining room.   “How lucky,” I just said, “that no one bought these before the clearance prices started.” 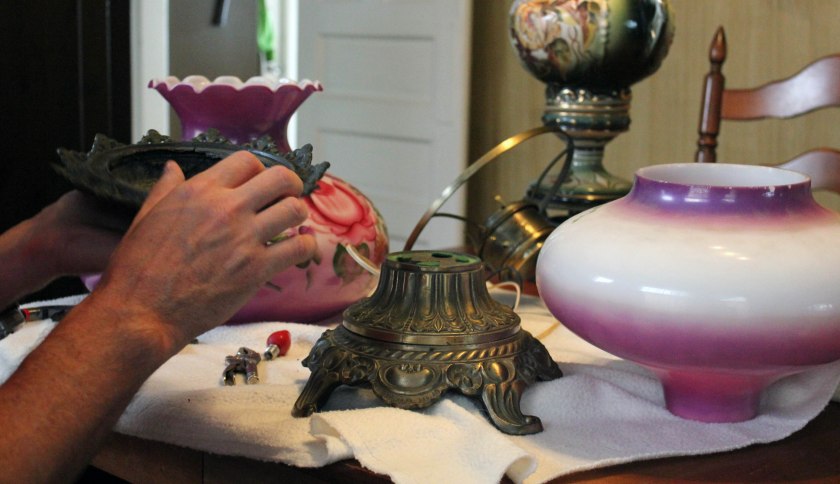