We meant to get to the estate sale earlier but the lure of sleeping late on Saturday morning proved too much. As it turned out, we got there in time. This estate sale was 4 stories of furniture, rugs, leaded windows, and interesting heaps of stuff. It was in a partially converted industrial warehouse in downtown Buffalo and I can’t figure out what was going on. Maybe some living space, maybe some packrat issues, maybe a business?  Wasn’t clear.

The stuff was arranged on raw cement floors flea market style on the first and fourth  floors, stacked warehouse shelving on part of the second, and weird decadent lounge on the second and third with little side rooms of warehouse chaos. Everything was tagged twice. Black price was Friday. Red price was Saturday morning.  Everything was at least half off the red price and we were told by another dusty scrounger that it was best to just talk to Andrew (one of our local estate sale moguls) for the best deal. 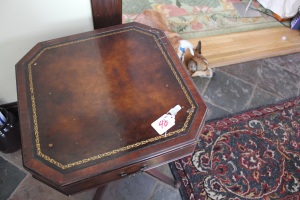 The WideEyedSpouse and I both have wicked colds but we girded ourselves and tromped through the levels twice, three times. Second floor: antique leaded glass window: $20. Second floor, loft: mahogany mini side table $20. Not veneer. First floor: bureau with bookmatched drawer veneer $30. Fourth floor: two ironstone platters: $10 and one leathertopped side table: $20. 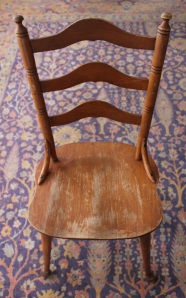 I was running my hand over the veneer on the bureau when I saw the little maple kitchen table and chairs. My breath caught. It was weird how my breath caught. I saw like it had happened, was happening, would happen again and again – I saw myself sitting at that table in my bathrobe drinking coffee and reading the paper in the morning sun. The table and chairs aren’t anything special. They’re probably c. 1920s, hard used, and one chair is sort of broken. They were dirty. Didn’t matter, they were already mine.  I looked at the price tag. Red price said $100.

The sharks were circling tighter. I felt a little thrill of fear. I needed the floor person who established prices and marked items sold – ah! There she was about fifty feet away with people walking toward her. I made eye contact and smiled big, bright, like she was family I hadn’t seen in years. She started for me and ignored the other people. The power of positive feelings! The little kitchen table and chairs were mine. Er, ours. The WideEyedSpouse is welcome to sit there with me. 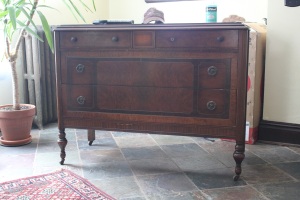 The people milling and swirling around the sale were getting increasingly desperate while we loaded our loot. “You want to sell that?”  an older couple asked when we walked by with the bureau. I thought they were joking but maybe not. “How much did you pay for that?” a chic blond asked us moments later, her eyes were running over the intact drawer fronts. “Thirty dollars,” I said. “You done good,” she told me and broke into a stiff jog toward the building entrance.

The little table is all set up in the kitchen. I scrubbed it and the chairs with a vinegar and water mix. The Spouse tightened some screws. I sat at it to clip coupons and shuffle through the Sunday paper. After three years living here, I felt warm, and safe, and settled. 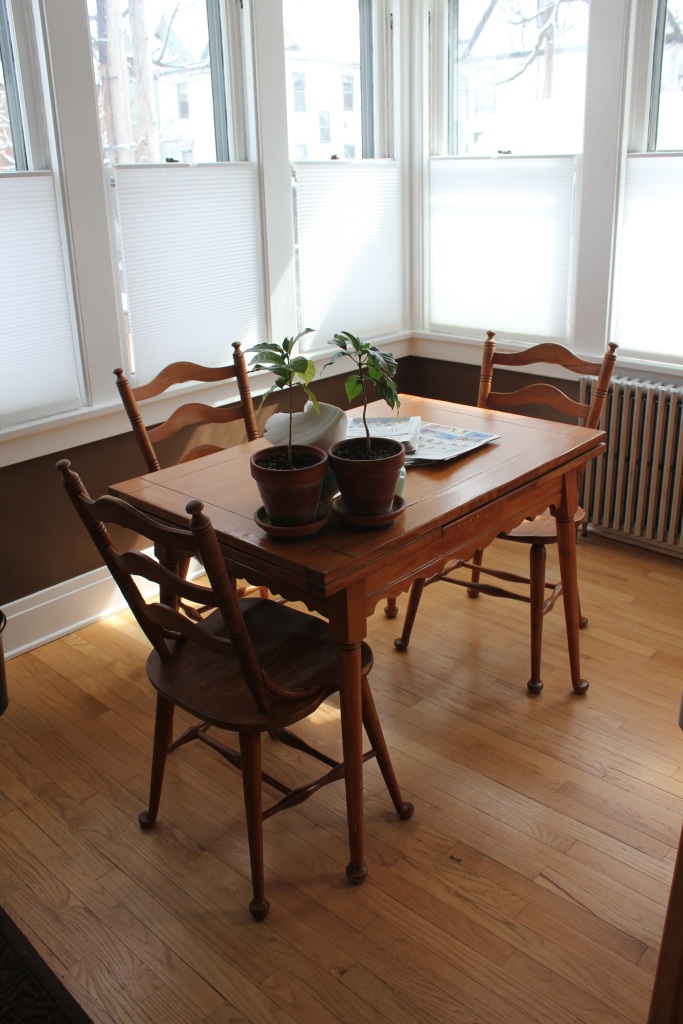