Two score and some years ago I was born to the WideEyedParents during one of the longest, darkest nights of the year. The event was remarkable only in that I proved to be a girl – although this is a matter for debate. Not whether or not I was (am) a girl, but whether or not it was expected. WideEyedDad says he pretty much expected sons, reasonable considering that girl-children are rare among the WideEyedFunks. WideEyedMom claims she had selected only girl names for use on me.

The Parents rushed me home for Christmas, where Mom discovered that Dad had left the old, discarded washing machine on The Front Lawn, For Days, At Christmas. Dad advises me not to discuss this further as it remains fresh in Mom’s mind. Inside the house, I imagine that the Older Brothers found my pink self a bitter disappointment. Probably they asked for a race car track, a rocket, or a tape recorder and Santa brought a squally doll instead.

The WideEyedParents with Younger Brother, not too many years after I came along.

And so, my arrival to this world and the WideEyedFamily was associated with complexities of joy, irritation, and darkling feelings. The trend continues. This year I celebrated the final day of my 40xth year with death, dismemberment, and mild destruction. Followed by a lovely dinner, thoughtful gifts, and simple joie de vivre.

In the earlier hours of my birthday, I found myself kneeling in carnage, dressed in full rain gear, under the deck. Sprays and splashes of brilliantly oxygenated blood soaked into the limestone block and pooled on cement footings. The WideEyedRat (boy was he ever) had snapped two traps and flailed himself free of both before expiring next to his rat hole. Rain beaded on his dense fur, his tailed stretched entirely out with a tiny curl at the end. He was stiff. Well into rigor mortis. Didn’t fit in the bag. Well the body did but I crawled out from under the deck with a heavy bag that looked like it held a single strange stick. 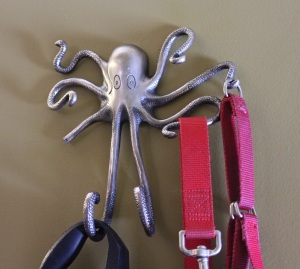 At lunchtime I arranged myself with pliers and my new dog leash hook. It was an octopus cast of poor alloy and its tentacles were too close together for my liking. Now it is a septopus with a stump. I figured the septopus was still authentic and not just a broken hook. Accidents happen even in the deep, maybe especially in the deep. My catastrophically injured Septie was going on the wall, ideally on a stud. I plugged in the drill.

I never did find that stud, but I did confirm that the plaster and lathe exists in a near continuous plane under the layers of paint on the back stair wall. Septie dangles from the single drywall anchor that survived insertion.

Exhausted, I had just turned 40something remember, I retired to the sofa with a glass of decent red wine, Buffy the Vampire slayer reruns, and my long-term (perpetually unfinished) knitting project. The WideEyedSpouse rattled in the kitchen, concocting my birthday dinner. I wondered, is this what life was like for 1970s husbands? Relax with a drink and TV while someone else prepares to feed me? I would have fought harder to keep that if I were them. Miss Tibbit the Useless Little Black Dog sighed and snuggled closer to me and Hamish the Corgi watched me from his chair across the room. I felt loved. Content. And warm against the foul winter rainstorm happening outside.