Team WideEyedFunk spent 5 hours in the garage Saturday, transplanting the Mini Cooper S’s failing electronic thermostat housing. It wasn’t quite freezing outside and I could feel my toes for most of the afternoon. Sure, some nice folks at the Mini dealership could have done it for us, and I could have stayed all warm and toasty on the sofa. But, the WideEyedHousehold is cheap. 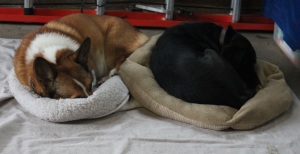 We suited up in chilly weather gear, prepared the surgery table, and started the multi-hour Mini evisceration. First the air box came out. Good thing we had a new air filter ready, the old one was caked with Buffalo street filth. Poor Mini was feeling asthmatic.

The Mini’s sinuses were crusted with urban decay.

We unplugged a couple of vacuum hoses, a bunch of electronic stuff, and yanked out the wiring harness box. We drained most of the antifreeze out of the engine. Messy, like pumping a stomach. Then, the WideEyedSpouse leaned deep into the engine and unhitched six hoses from the thermostat housing. Some went to the turbo cooling system, some feed the heating system somehow, and a really big one shot back into the water pump. That one vomited some nasty when it came undone. The old thermostat housing had caked up leaky holes marks all over it. I was driving a Mini that was ready to puke out its guts all over some busy, probably rainy, highway. Poor Mini. Poor me.

In less than an hour (listening to iTunes radio playing hipster songs) we plonked the new housing on, shoved the hoses on, plugged in the vacuum hoses, reattached a bunch of electronic things, put the air box back, and zip tied the crap out of anything loose. The WideEyedKitchen sacrificed the iced tea jug for mixing the Mini soup, er, antifreeze and we fed the little guy some juice. 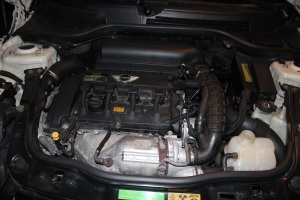 In an act of great bravery, we zipped down a dark and rainy Main Street to pick up our large pepperoni. The Mini held strong. Go Mini. Go Team WideEyedFunk. Wish us all luck when the water pump goes – and please, think warm thoughts in that wish. None of us feel like cranking apart the passenger side of the car to transplant that in January. But we’ll do it. Because we’re cheap. And because we want the Mini to feel ok.