The Buffalo Bisons beat the Columbus Clippers in a dramatic bottom of the 10th inning run from third as the Clipper’s catcher scrambled for a mis-pitched ball. The 1000 or so Buffalonians in the stadium hooted and whooped as they filed out of Coca-Cola Field into the gloaming twilight. 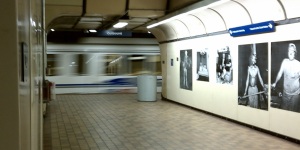 We were at the game last night because the Spouse won the department lottery for the company’s baseball tickets. We fed the poochies, locked down the household, and set off to the Metro station. We walked past permanent Santa who watched us from above, and we descended level after level into the bowels of the creepily uncrowded Metro tunnel. I emptied my pockets for the $8 round trip ride for the both of us. Parking downtown was $5. But then, where’s the adventure in parking a car?  I do that every day one place or another.

The Buffalo Bisons mascot Buster and his son Chip wandered the stands – the Spouse high fived Chip. The Boy Robin tromped up and down the stadium stairs yelling “Snow Cones! Three dollars!” with relentless cheer and hope. I think he was selling the same couple of snow cones the whole evening. Like Batman’s true sidekick he remained stalwart in adversity, and his cape fluttered heroically in the wind, his eyes were sharp and clear behind his mask.

“Cold Bud, Bud Light, Peanuts!” Alrighty. I got some peanuts and the Spouse got a can of Bud from the Conehead – “With this can the Conehead guarantee, if it’s warm, this beer’s on me…” The Spouse sipped – it wasn’t warm. And the peanuts were great, fresh, salty, flakey. When I was done with the bag the Spouse was covered with the red peanut skins caught by the evening breeze.

We watched the fast game. We looked over at the General Mills Big G on their heritage cereal plant. Trucks heading to and coming from Canada roared past on the 190. The Spouse and I were featured on the big screen not once, but TWO times – the Delta Sonic Super Kiss Cam and the other time during a lull in the game. I know, right – how many times do you get to be on the screen in a professional league arena? TWO times in one game when you go to minor league. I think we are celebrities now. I could tell people on the train home wanted my autograph. Actually, the Spouse and I speculated that since the audience was sparse we ALL got a turn up there.

A crazy old guy dressed in full Bisons regalia, including batting cap, which maybe was for his protection, shrieked incomprehensibles at the Clippers – he’d point at one coming to bat, run his finger across his throat, punch one fist into another, point at his belly button and then back the batter on deck. You know it was weird. But, it was unnerving the Clippers, we could all tell. So, we cheered our unconventional psychological weapon as the innings of no runs, no hits, all strike outs and walks marched on.

The tension of the 10th inning was eased by a tiny blonde girl in the front of the stands. “Let’s go Bisons!” her little voice piped – we clap, clap…clap, clap, clapped in response. She called it again. We clapped. She looked transcendent with joy and it was on – she chanted, we clapped, over and over until her little voice rasped and she collapsed, exhausted, next to her dad. I think we transformed her life last night, and taught her the intoxicating power of controlling a crowd through performance. I hope she’s ok.

Massive mosquitoes like small fighter planes arrived and menaced in the lights above us. They weren’t quite hungry enough to come down for dinner, but everyone was scared and looked up at the swarm pretty regularly. A new player for the Bisons stepped up  – his stats at all zeros. The crowd cheered him on, welcoming him to their club. He struck out I think, but I was busy watching the mosquito swarm.

The Spouse and I have been to ball games in a lot of states. Big stadiums in PA, WI, and MN, little Wrigley where we saw a home run go through someone’s window across the street – and more. Last night’s game in the more empty than full stadium, with little contests, races, and swag give-aways between most innings, with young guys in ill-fitting uniforms trying real hard– was the best, fastest, and most cheerful game I’ve ever seen.  We’ll be back Bisons – because your baseball is fun baseball.