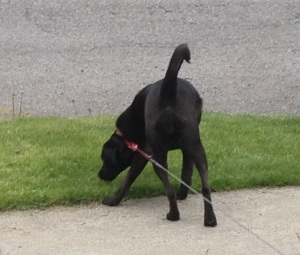 Miss Tibbit explores the limits of her autonomy within the bounds of Authority.

“Miss Tibbit,” I addressed her hindquarters as she strained away from me with all the power in her small frame. “Miss Tibbit,” I repeated and shortened her leash during a brief lull in the pulling. Her head snapped when she hit the end of her lead sooner than expected. She gave me a dark look that clearly said, What do think you’re doing?

I reeled her in and asked her to sit by my foot. She refused. Flatly.

“Miss Tibbit, do you know what obedience means?” She glanced at me from the corner of her dark eye. No. She was not being truthful. She watched a squirrel in the tree above us. She heaved at the leash in dog rampant, front paws flailing toward a submissive Golden Retriever across the street. Over her shoulder between choking gasps and yips she said, But I do know what disempowerment means!

I gasped. The audacity. Disempowerment indeed! 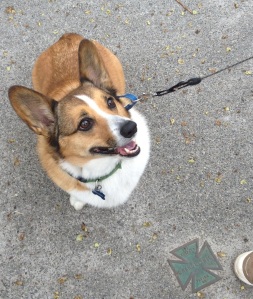 I asked Hamish to join us. He was illicitly rolling in a moldering worm and finished up before coming over. He, always a gentleman, sat by my foot and looked up at me smiling. What can I do for you?

“Hamish, do you know what obedience means?”

Sure. It happens when I comply with your rules and submit to your authority. He sniffed Miss Tibbit’s foot and walked on.

I thought to myself: EXACTLY. “Miss Tibbit,” I called forward to Miss Tibbit, who now had her snout shoved into a clump of dense spring grass, “Miss Tibbit, did you hear Hamish? This is how we live within a society. We all agree to obey higher levels of authority and to conform to our culturally derived rules for appropriate behavior.” 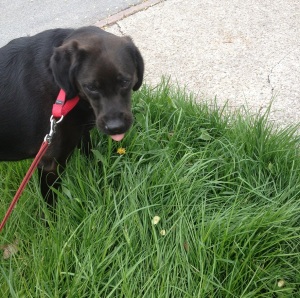 Miss Tibbit bravely delivers her anti-authoritarian oration while under the restraint of Authority.

Miss Tibbit looked up, plump shreds of grass dangling from her lower lip. What happens when Authority establishes rules prohibiting my ability to perform actions demanded by my cultural milieu and my own good conscience? What happens when an entire subset of citizens is uniformly stripped of autonomy by Authority and society at large? Is it not my right, even my burden to protest these removals of individual autonomy? Hamish’s ears perked forward and he watched Miss Tibbit with interest. I didn’t like him being exposed to her radical ideas. He has always been a good boy, no trouble at all. We walked on down the block while I thought about it.

Ah, I had it. We stopped for a moment under the bower of a large blooming cherry tree. “But Miss Tibbit, you are meant to trust me to know what is best. You don’t understand the dangers of the cars, toxic lawn treatments, other dogs. The world is too big and too complex for one small dog of limited experience to understand.” Hamish nodded at me, Yeah, he said in his small voice. 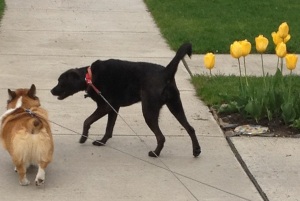 Miss Tibbit snorted and shook her body, tail lashing a little longer than the rest of her. I didn’t choose you, your authority was granted by the system. And you don’t trust me. You don’t believe that I have the ability to know something you don’t, or that I might be not disobeying but instead attempting to negotiate a situation outside of your awareness or concern.

Hamish cocked his leg against a hosta. I think Miss Tibbit is advocating civil disobedience, he said. I didn’t see anything particularly civil about her heaving and straining against the leash, or yipping and barking at everything and nothing. It looked like plain old disobedience to me. But she and Hamish were making potentially valid points and I probably should consider their perspective. Perhaps later. 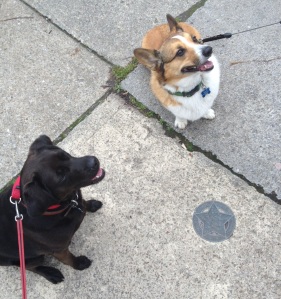 “Who wants a cookie?” I asked. They bounded over and like good dogs sat on haunches in front of me. They deftly snapped their treats from the air. It was nice and quiet and calm while they chewed. No trouble at all.